For this post, I have hand-picked my top 10 best Top Gun mugs, and if you know a fan of the 80s movie, then you’ll find plenty of gift ideas here that will be well-received.

Just about anyone who lived through the 1980s will certainly remember the original movie, which starred Tom Cruise as LT Pete “Maverick” Mitchell and Kelly McGillis as Charlotte “Charlie” Blackwood.

This Top Dad mug would make a great choice for a birthday/Father’s Day, and features a distressed graphic giving it a slightly aged, retro feel.

This is my favourite Top Dad design and can be bought from Etsy UK. The seller has bucketloads of 5 star reviews, and at £6 (as I write) the mug is very reasonably priced, too. 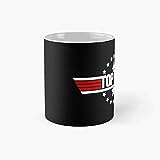 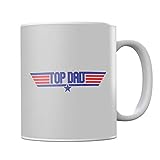 Fan’s of Tom Cruise’s character will adore this Maverick mug which is a very popular choice on Amazon.co.uk. The graphic has been inspired by movie’s logo, and really does look authentic.

I adore this eye-catching design which features the F-14A Tomcat fighter jet soaring through the skies. This one can be bought on Cafepress, and other sizes are available including a latte mug.

This Goose mug is a nice alternative choice and represents the character Nick “Goose” Bradshaw, who was played by Anthony Edwards in the film. You may remember that the he was killed after ejecting from his plane and hitting the aircraft canopy.

I also recommend checking out the Top Gun mugs at Truffleshuffle, who specialise in 1980s themed gifts.

5. I Feel The Need, The Need for Speed Mug

Celebrate the famous quote from the film spoken by Maverick, with one of these I feel the need, the need for speed mugs.

Here is another striking design featuring Maverick’s helmet (the one he wore on his head, not the glans of his penis, obviously!). This design is officially licensed and can be bought from Pyramid International on Amazon.

7. Because I Was Inverted Mug 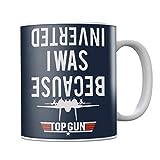 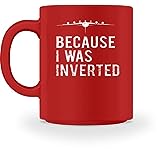 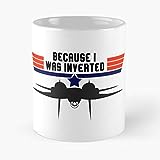 “Because I was inverted” is an iconic line by Maverick (Tom Cruise) while at the flight school after Charlie asks him “Well, if you were directly above him, how could you see him?”. This is the best designed mug using the quote, and the only one with a dark blue background.

This is a very cool design with sunglasses reflecting palm trees and sunset – very 80s! It features another famous quote from the film. After Goose’s death, Maverick has to decide whether to participate in an aerial dogfight. He clutches Goose’s dogtags and says “Talk to me Goose”. He does, indeed, engage.

This line is from the early part of the film. Whilst piloting the F-14 Tomcat, Maverick contacts the control tower and says “This is Ghostrider requesting a flyby”. The controller replies “Negative ghostrider, the pattern is full”.

This is a nicely designed mug by Vectorbomb, and a geeky alternative to all of the other more iconic quotes.

LT Tom “Iceman” Kazansky was played by Val Kilmer, and the character is an iconic part of the film. He is Maverick’s rival and has a huge ego. The recipient can pay homage to him with this splendid Iceman mug.

Well, I hope you have found my selection of my favourite Top 10 Top Gun mugs useful. You may also like to check out these other movie mugs. 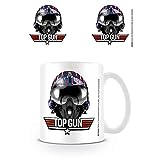