Feast your eyes upon this very cool Doctor Who Police Box TARDIS mug, before it disappears into time and space! 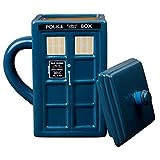 This officially licensed merchandise is shaped just like the TARDIS, and features a removable lid which will help to keep your favourite beverage steaming hot!

It’s the perfect gift for any Doctor Who fan, and it will certainly be well received. Sadly, it’s not bigger on the inside, but you can’t have everything!

Although there are other cheaper TARDIS mugs available, this official mug is, by far, the best looking and best rated by customers.

You may also like this awesome TARDIS teapot. Once again, this is an officially licensed product, and you can also buy it with a mug.

TARDIS mugs at the official Dr Who Store

Did you know? The TARDIS (Time And Relative Dimension In Space) made its first appearance in the very first episode of Doctor Who entitled An Unearthly Child, which aired on 23rd November 1963 in the UK, and starred William Hartnell as the Doctor.